I am a huge fan of Tyler Perry’s work. I can quote most of Madea’s lines from the previous movies and even tell you what she was wearing in the particular scene. That is how severe my love is for Madea so you can imagine my excitement when this movie came out.

Madea’s Witness Protection follows George Needleman, an investment banker who has been set up as the linchpin of a fraudulent company owned by the mob. The only way to prove his innocence is to help the police nail the mob. He is relocated with his family to Madea’s house. 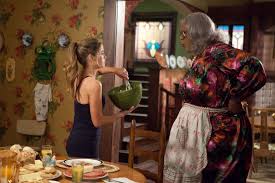 Madea is shocked to find that the family is white and worries on how she will hide a white family in her neighbourhood. She is also very aggitated by how disfunctional the family is. Madea dishes on the humorous wisdom that she has become widely known for, which makes for a good laugh.

Jake is the son of a preacher and worries about how he will get back the money of the church which he invested through George’s company. His father plans to announce his retirement and that the bond for the church has been paid off. This leads to Jake not having the guts to tell him that they have lost the money.

When George finally figures out how to get the money back to the investors, we see Madea taking her very first plane ride and dressing up and staying over at an expensive New York hotel. 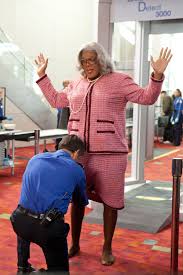 Joe isn’t left behind. His story involves George’s senile mother. She claims to know Joe and says that George is his son. At first Joe thinks she is crazy, but he later tries to make sense of it all. Hilaaarious!

But apart from the humour, the story feels incomplete. I would have loved for the mob to actually go to Madea’s house and be faced with Madea, who is more than a force. It would have been interesting and hilarious to see how she deals with them.

What I did like though, is how light-hearted the movie was. Usually Tyler Perry movies tackle hard topics like abuse and drugs. I also liked the involvement of the church, which never stays behind in Tyler’s movies.

Over all, I would definitely recommend this movie! I enjoyed it.

PS: My friend, Hope could not stop laughing the times when she was actually concentrating on the movie. Next time, Im confiscating her cellphone.