Those close to me will tell you, I am not much of a movie person. For the most part, it is because I have already conditioned myself to think that it is merely characters acting out scenes. But now and then something good comes out a cinemas. Recently, I watched A Thousand Words in which Eddie Murphy plays the leading role. 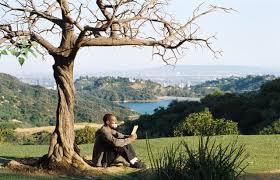 Jack McCall (Eddie) is a literary agent who has a smooth tongue. He can convince anyone to do anything. In the movie he tries to convince a self-help guru to let him publish and sell his book. The guru immediately sees that Jack is only interested in the money that he can make so he agrees to let Jack publish and sell his book. After contracts have been signed, Jack later finds out that the book is only five pages long.

That evening, a tree magically appears on Jack’s backyard. He consults with the guru about the tree and they discover that with each word that Jack speaks, a leaf falls from the tree and when all the leaves have fallen off, it will die and so will Jack. Everything that happens to the tree happens to Jack. He then learns that he should avoid all forms of verbal communication, which causes strain on his relationship with his wife.

As the movie progresses, he visits his mother at the old age home and realises that she thinks, he is his father, Raymond. She tells him that Jack is angry with him ever since he left them. Jack learns that he has to reconcile with his father. He visits his fathers’ grave and with only 3 leafs remaining on the tree, Jack says the words “I forgive you.”

With the tree now having no leaves, Jack suffers a heart attack but is later woken up by a phone call from his assistant who lets him know that new leaves have magically appeared on the tree. He reconciles with his wife and his mother finally tells him apart from his father.

For me this was an amazing movie, because it epitomises what I always preach. Forgiveness is for yourself. It is so that you can be free!

Thank you to SterKinekor theatres. I had a good time!